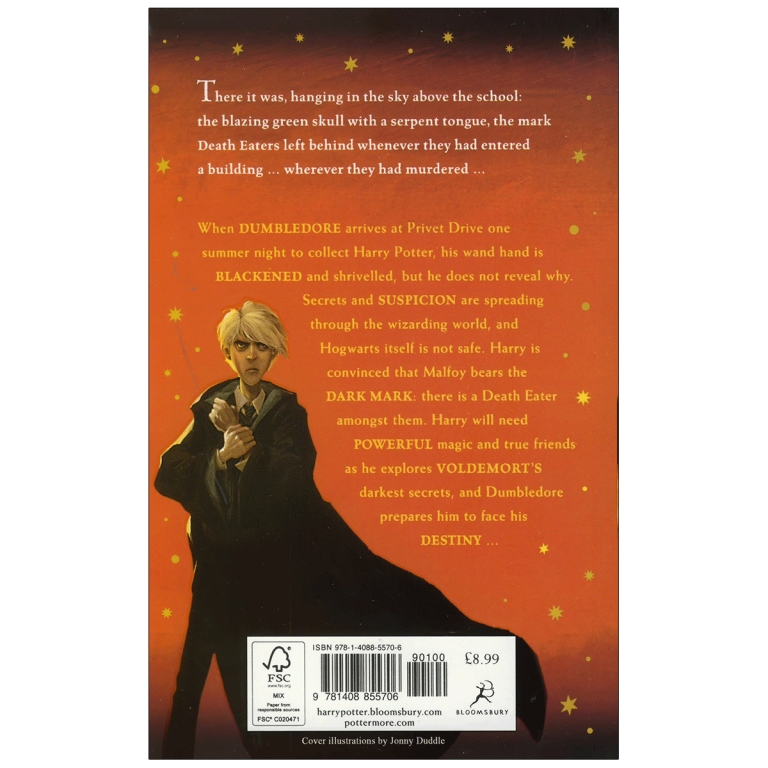 Harry Potter and the Half Blood Prince 6

Harry Potter and the Half-Blood Prince

This special edition of Harry Potter and the Half-Blood Prince has a gorgeous new cover illustration by Kazu Kibuishi. Inside is the full text of the original novel, with decorations by Mary GrandPré.

The war against Voldemort is not going well; even Muggle governments are noticing. Ron scans the obituary pages of the Daily Prophet, looking for familiar names. Dumbledore is absent from Hogwarts for long stretches of time, and the Order of the Phoenix has already suffered losses.
And yet…

As in all wars, life goes on. Sixth-year students learn to Apparate — and lose a few eyebrows in the process. The Weasley twins expand their business. Teenagers flirt and fight and fall in love. Classes are never straightforward, though Harry receives some extraordinary help from the mysterious Half-Blood Prince.

So it’s the home front that takes center stage in the multilayered sixth installment of the story of Harry Potter. Here at Hogwarts, Harry will search for the full and complex story of the boy who became Lord Voldemort — and thereby find what may be his only vulnerability.

J. K. Rowling is the author of the beloved, bestselling, record-breaking Harry Potter series. She started writing the series during a delayed Manchester to London King’s Cross train journey, and during the next five years, outlined the plots for each book and began writing the first novel. Harry Potter and the Sorcerer’s Stone was published in the United States by Arthur A. Levine Books in 1998, and the series concluded nearly ten years later with Harry Potter and the Deathly Hallows, published in 2007. J. K. Rowling is the recipient of numerous awards and honorary degrees including an OBE for services to children’s literature, France’s Légion d’Honneur, and the Hans Christian Andersen Literature Award. She supports a wide number of causes through her charitable trust Volant, and is the founder of Lumos, a charity working to transform the lives of disadvantaged children. J. K. Rowling lives in Edinburgh with her husband and three children.

Kazu Kibuishi is the creator of the New York Times bestselling Amulet series and Copper, a collection of his popular webcomic. He is also the founder and editor of the acclaimed Flight anthologies. Daisy Kutter: The Last Train, his first graphic novel, was listed as one of the Best Books for Young Adults by YALSA, and Amulet, Book One: The Stonekeeper was an ALA Best Book for Young Adults and a Children’s Choice Book Award finalist. Kazu lives and works in Alhambra, California, with his wife and fellow comics artist, Amy Kim Kibuishi, and their two children. Visit Kazu online at www.boltcity.com.

Mary GrandPré has illustrated more than twenty beautiful books for children, including the American editions of the Harry Potter novels. Her work has also appeared in the New Yorker, the Atlantic Monthly, and the Wall Street Journal, and her paintings and pastels have been shown in galleries across the United States. Ms. GrandPré lives in Sarasota, Florida, with her family.

Read or download the first chapter of Harry Potter 6

Harry Potter and the Half Blood Prince 6