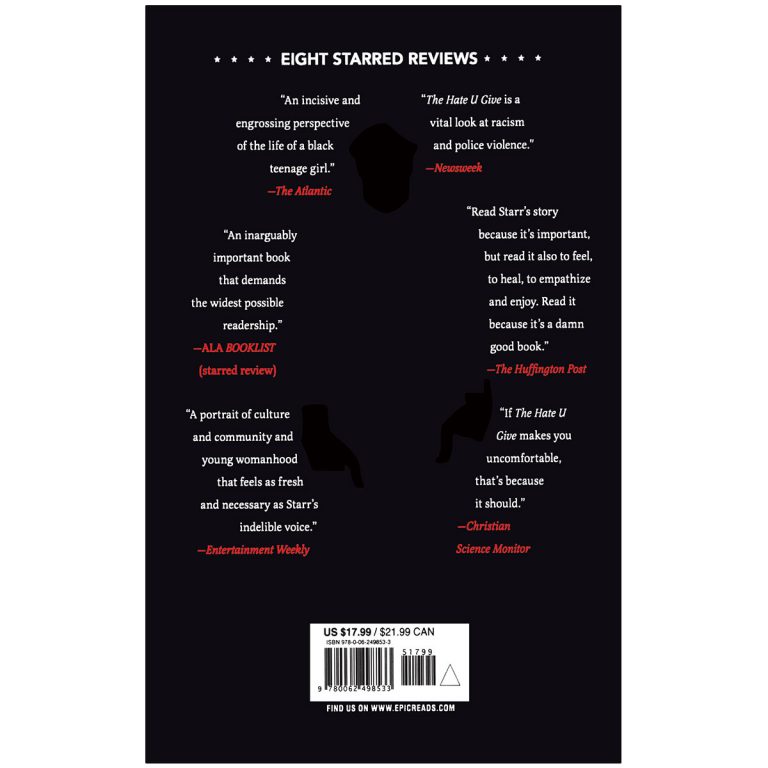 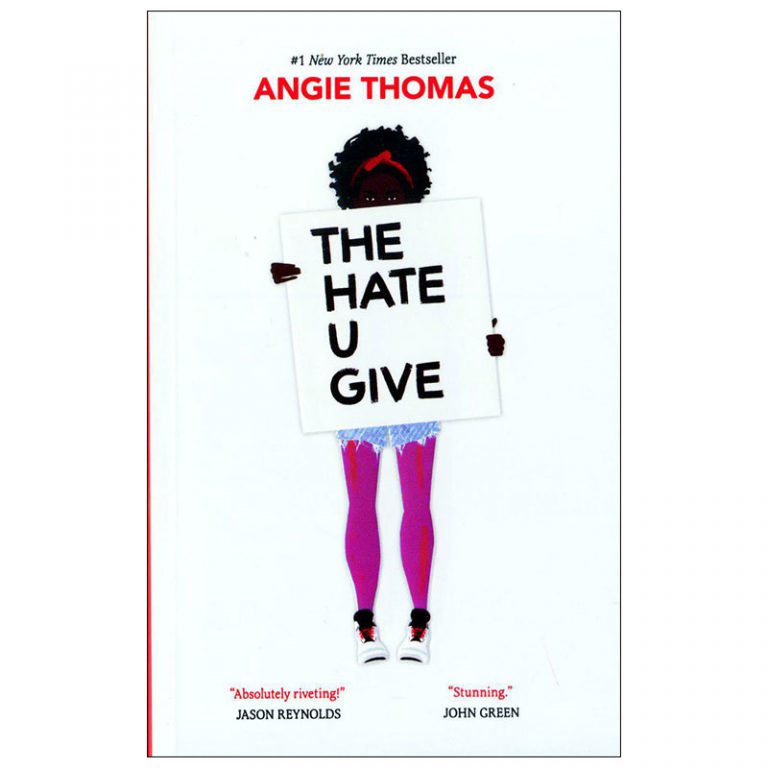 Sixteen-year-old Starr Carter moves between two worlds: the poor neighborhood where she lives and the fancy suburban prep school she attends. The uneasy balance between these worlds is shattered when Starr witnesses the fatal shooting of her childhood best friend Khalil at the hands of a police officer. Khalil was unarmed.

Soon afterward, his death is a national headline. Some are calling him a thug, maybe even a drug dealer and a gangbanger. Protesters are taking to the streets in Khalil’s name. Some cops and the local drug lord try to intimidate Starr and her family. What everyone wants to know is: what really went down that night? And the only person alive who can answer that is Starr.

But what Starr does—or does not—say could upend her community. It could also endanger her life.

And don’t miss On the Come Up, Angie Thomas’s powerful follow-up to The Hate U Give.

Gr 8 Up—After Starr and her childhood friend Khalil, both black, leave a party together, they are pulled over by a white police officer, who kills Khalil. The sole witness to the homicide, Starr must testify before a grand jury that will decide whether to indict the cop, and she’s terrified, especially as emotions run high. By turns frightened, discouraged, enraged, and impassioned, Starr is authentically adolescent in her reactions. Inhabiting two vastly different spheres—her poor, predominantly black neighborhood, Garden Heights, where gangs are a fact of life, and her rich, mostly white private school—causes strain, and Thomas perceptively illustrates how the personal is political: Starr is disturbed by the racism of her white friend Hailey, who writes Khalil off as a drug dealer, and Starr’s father is torn between his desire to support Garden Heights and his need to move his family to a safer environment. The first-person, present-tense narrative is immediate and intense, and the pacing is strong, with Thomas balancing dramatic scenes of violence and protest with moments of reflection. The characterization is slightly uneven; at times, Starr’s friends at school feel thinly fleshed out. However, Starr, her family, and the individuals in their neighborhood are achingly real and lovingly crafted. VERDICT Pair this powerful debut with Jason Reynolds and Brendan Kiely’s All American Boys to start a conversation on racism, police brutality, and the Black Lives Matter movement.—Mahnaz Dar, School Library Journal

“As we continue to fight the battle against police brutality and systemic racism in America, THE HATE U GIVE serves as a much needed literary ramrod. Absolutely riveting!” (Jason Reynolds, bestselling coauthor of ALL AMERICAN BOYS)

“Angie Thomas has written a stunning, brilliant, gut-wrenching novel that will be remembered as a classic of our time.” (John Green, bestselling author of The Fault in Our Stars)

“This is tragically timely, hard-hitting, and an ultimate prayer for change. Don’t look away from this searing battle for justice. Rally with Starr.” (Adam Silvera, New York Times bestselling author of MORE HAPPY THAN NOT)

“With smooth but powerful prose delivered in Starr’s natural, emphatic voice, finely nuanced characters, and intricate and realistic relationship dynamics, this novel will have readers rooting for Starr and opening their hearts to her friends and family. This story is necessary. This story is important.” (Kirkus Reviews (starred review))

“Though Thomas’s story is heartbreakingly topical, its greatest strength is in its authentic depiction of a teenage girl, her loving family, and her attempts to reconcile what she knows to be true about their lives with the way those lives are depicted—and completely undervalued—by society at large.” (Publishers Weekly (starred review))

“Beautifully written in Starr’s authentic first-person voice, this is a marvel of verisimilitude as it insightfully examines two worlds in collision. An inarguably important book that demands the widest possible readership.” (Booklist (starred review))

“The Hate U Give is an important and timely novel that reflects the world today’s teens inhabit. Starr’s struggles create a complex character, and Thomas boldly tackles topics like racism, gangs, police violence, and interracial dating. This topical, necessary story is highly recommended for all libraries.” (Voice of Youth Advocates (VOYA) (starred review))

“Thomas has penned a powerful, in-your-face novel that will similarly galvanize fans of Kekla Magoon’s How It Went Down and Jason Reynolds and Brendan Kiely’s All American Boys.” (Horn Book (starred review))

Angie Thomas was born, raised, and still resides in Jackson, Mississippi as indicated by her accent. She is a former teen rapper whose greatest accomplishment was an article about her in Right-On Magazine with a picture included. She holds a BFA in Creative Writing from Belhaven University and an unofficial degree in Hip Hop. She can also still rap if needed. She is an inaugural winner of the Walter Dean Myers Grant 2015, awarded by We Need Diverse Books. Her debut novel, The Hate U Give, was acquired by Balzer + Bray/HarperCollins in a 13-house auction. Film rights have been optioned by Fox 2000 with George Tillman attached to direct and Hunger Games actress Amandla Stenberg set to star.